It is no secret that millions are wasted in companies due to random reasons. When it comes to wasting intellectual resources in engineering and machine building, one of the root causes is often a poorly set up CAD system and the unclear engineering procedures which stem from it.

In this article, I’ll discuss some topics, which can cause significant losses by the end of the day. In such situations, it is often not the fault of the system but rather principal approaches, attitudes, and behaviors that must be changed through the system for better results.

The things described in this article may not seem huge, but if all of those small things are accounted for, it will add up to a lot of mouse clicks, a lot of frustration from doing things repeatedly and a loss of focus. This can add up to about 100-200 hours lost per person every year. Multiply this by the cost of running an engineering team for an hour and you can see how the money adds up.

We, as engineers, see that it’s well worth the time to fix these irritating issues and to remove the need for repeating these tasks on a daily basis.

Some of the examples may seem incredibly simple, but trust us when we say that there are a lot of companies struggling with basics such as these.

Decimal Places in Units and Dimensions

One of the simplest (and unfortunately a frequent mishap) has to do with decimal places in templates. Often there isn’t a company standard and the users need to waste time manually changing these on an hourly basis. 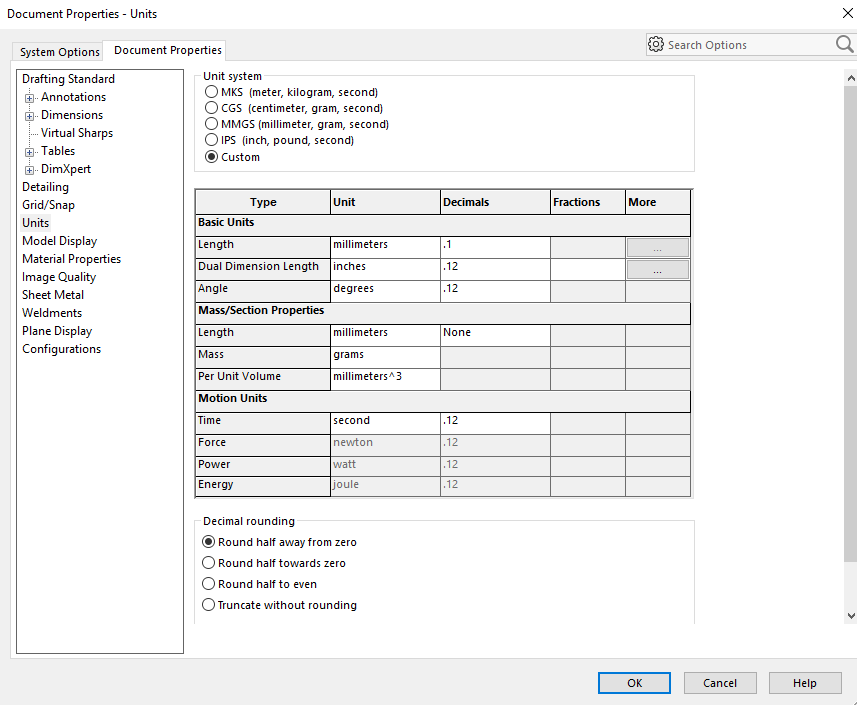 Additionally, in drawing templates, the primary and tolerance precisions should be adjusted for the dimensions. Quite often the tolerance is set to be “same as nominal” which is SOLIDWORKS’ default.

But this creates multiple additional steps for the engineers.

In most cases the tolerance precision needs to have more decimal places than the main unit precision. Therefore it’s reasonable to change it in the templates and save yourself the daily hassle.

Different units may cause issues when BOM is imported to ERP systems which need predefined mass units.  When it comes to “strange tolerances” there will be time-consuming discussions/clarifications with the suppliers. Fixing those things takes less than a couple of minutes.

Having all the items in the toolbox  available for all of the users often results in a BOM such as this being generated. This means that the engineers have to spend time on fixing these pointless rows in a drawing’s BOM… repeatedly… for each assembly.

To counter this, the items that aren’t foreseen to be used should be switched off, and switched on only as required. Yes, it is difficult to entirely predict what components are needed, but there should be a person responsible for managing the toolbox, switching on components and filling the data as required. In smaller companies it’s recommended to at least have a clear manual on managing the toolbox.

It is also recommended to use an IDNumber to make a fastener truly unique (more about IDNumbers vs Part Numbers in our book), by including a standard, grade and surface finish. This will help tremendously when connecting to ERP or using Excel for sorting items.

Too often different fabrication standards, surface treatments, etc are just plain text boxes in the drawings. Typically this creates a situation where all the drawings must be opened and edited if something needs to be changed.

The solution is to use smart blocks and pull the data from model’s metadata instead. This gives you the option to change all the required drawings with the PDM or the Task Scheduler without having to open all the drawings manually. Generally when these notes are linked from the model, then all the information and mass changes are known and can therefore be somewhat automated.

When adding an initial table to the drawings, cell sizes may change due to some incorrect metadata. If that happens it may take a lot of time to get everything to look neat again. It is not really a major error, but it’s much more comfortable to be able to lock all cell dimensions and unlock single rows/columns when needed. 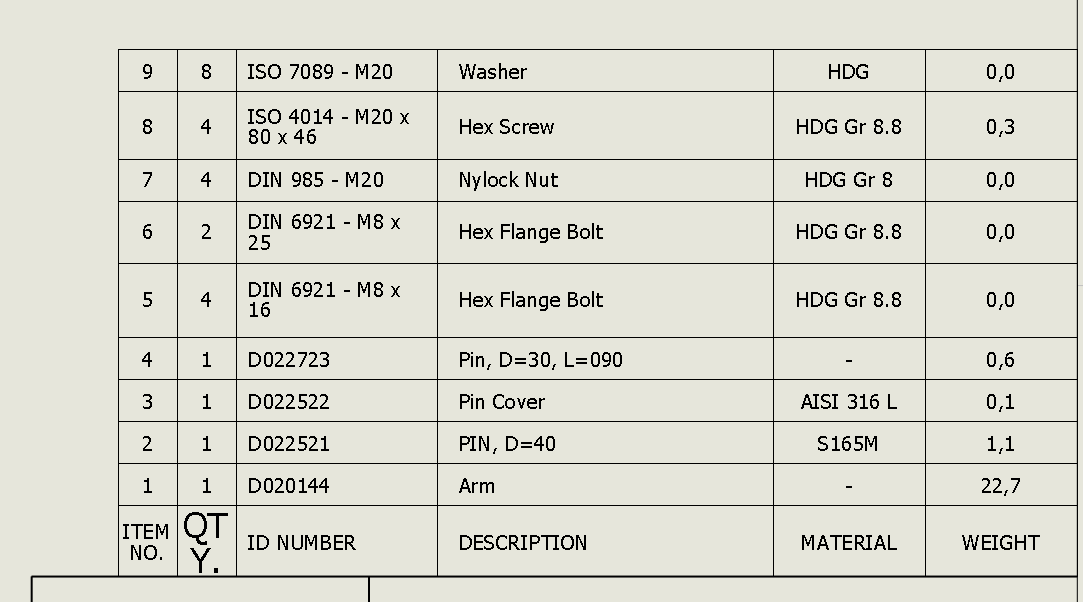 This is more of a visual problem, but it usually hurts the engineers’ (at least decent ones) eyes and they will spend time on fixing it.

Therefore, to prevent wasting time it would be smart to fix the cell dimensions in the table templates. One additional tip would be to also assign anchor points for the tables in the templates. It only takes a couple of minutes.

A lot of companies have a library accumulated with a lengthy history that’s been collected by a lot of different people who borrowed from “friends and foes.” This leads to the metadata inside those models to be pretty messy when it comes to real life application.

For example, when using weldment profiles, then in such a case the cut-list data must be fixed manually. The sad part is that even if it’s a simple L75x50x10, then each engineer must fix it in their newly created tables. 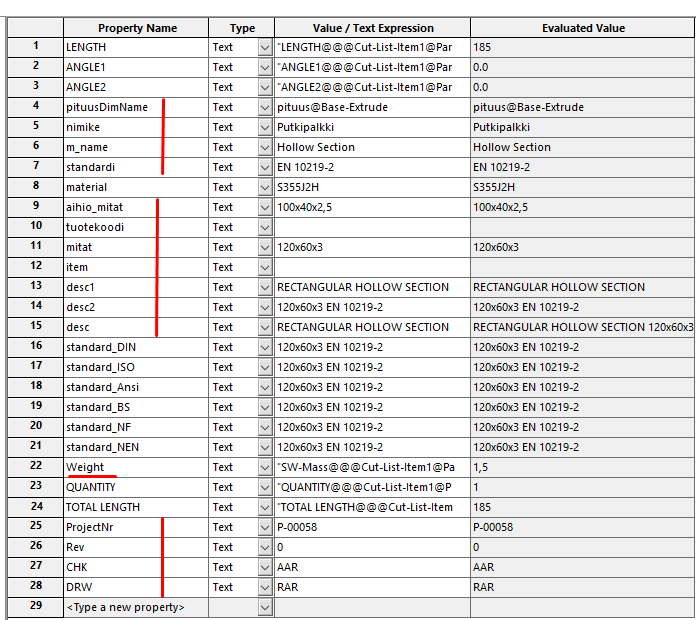 It would be much more reasonable to simply fix the library instead.

Quite often companies use hierarchical numbers due to historical reasons. This worked back in the day when modern tools weren’t really seen as essential yet. Nowadays, especially when using PDM systems, this is an out-of-date approach and often the worst thing you can do.  There are companies who are creating more or less typical products, but who manage it as if everything they do were project based. This creates a situation where files are copied for each project, the project number is changed in a file name (everyone who has ever used CAD software knows how painstaking that is) and then the result is sent through the workflow. As if that wasn’t enough, the file names must be changed again since the structure was changed. The problem is exacerbated when parts are used in different assemblies and pretty much kills the entire idea of even having a hierarchy.

The best way is to just use sequence numbers from a number generator. It helps to really think whether the copying process is needed or should there just be a product in one folder that is improved over time. Yes sometimes old versions are required for maintenance purposes or for ordering spare parts, but it’s really easy to check the history if the workflow is built right.
Unfortunately, this is not a five minute task for the administrator. Changing this needs rethinking a lot of processes and behaviors, but the rewards are well worth it!

These things get solved in as many different ways as there are different companies. In each company, the engineers have to come to a decision whether they should do this or that, to use hierarchical numbers, but call it a number in the metadata, use tags etc. This is understandable as these decisions are often made by people whose core competency is not in CAD administration but in engineering. This has created a situation where companies cannot co-operate as easily since their systems just don’t play well together. What’s worse, a lot of those decisions end up costing money for the companies.

Saying “We have done this for ages!” is not an excuse for not improving, it’s either an excuse to be lazy or said by fearful people.

“The fears we don’t face become our limits” – Robin Sharma

Overall there is a principal decision to be made. Should the company constantly extinguish fires or deal with the causes to prevent them? Should the engineers do repetitive things like it has always been done or should these things be managed, or at least reviewed by a person who keeps things tidy and clean so that the rest of the engineers can actually focus on adding value to the products instead of wasting time on menial tasks?

The amount of money being wasted on such things is mind-boggling! Yes, change is hard, and for a moment efficiency can go down, but the efficiency of the company is in the long term should outweigh the short term pain of a change. The goal of the company should be to improve and to become more competitive in the future instead of getting by, day by day and slowly falling behind the competition!

This is simply the tip of the iceberg! All the solutions along with the best practices and more are explained in our book called CAD Administration Handbook for SOLIDWORKS.

All this time wasted will add up to even more wasted time in other departments as well. For example, bad metadata will create additional questions for purchasing and fabrication, which will then take additional time for engineers to answer. It’s like an avalanche that starts small, since the small things in engineering culminate into large issues in later stages of production. 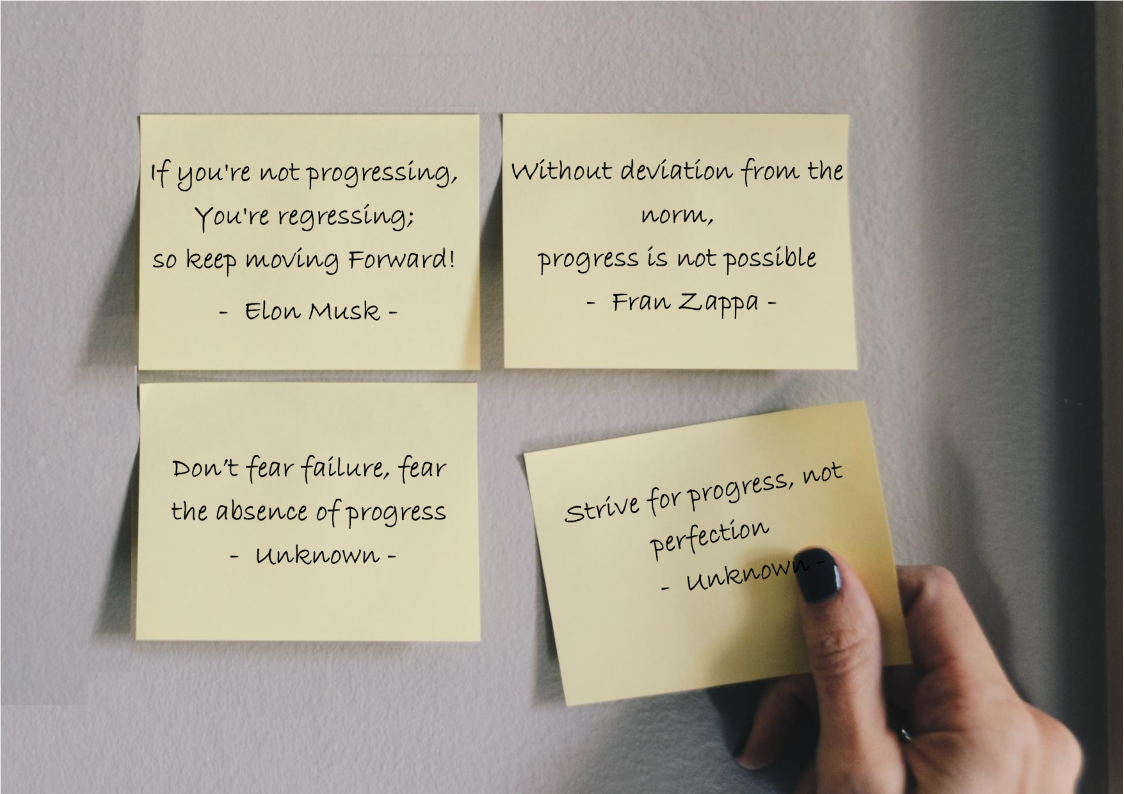 PS! We’d love to hear from you, about how these things are set up in your company, so don’t be shy to comment below!